8 Black-owned fashion brands to buy from.

The Black community has always been incredibly talented but has had to fight to get attention. Historically, the fashion industry (like most other industries) has not treated them correctly. Even though designers pulled references from … 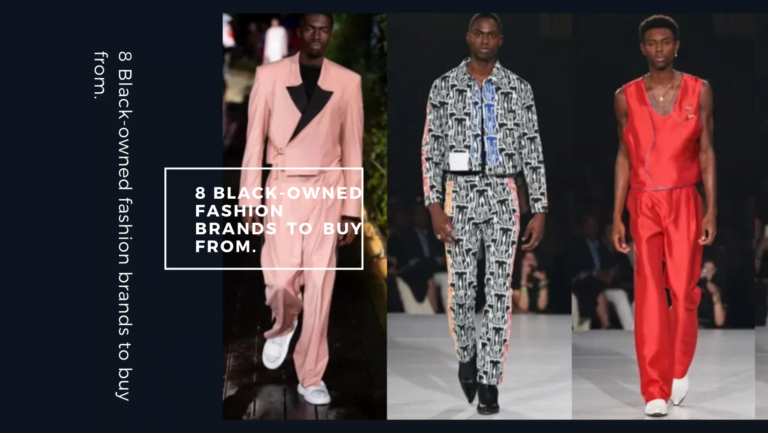 The Black community has always been incredibly talented but has had to fight to get attention. Historically, the fashion industry (like most other industries) has not treated them correctly. Even though designers pulled references from Black culture and made it mainstream.

Even though the industry has been doing its bit for representation. It is only on the surface level, to get approval (and not get canceled). The actual representation has been missing when it comes to high-level decision-making teams and more.

The customers are the ones who have ushered in this change, demanding more and more. We need to keep this energy up in all fields. We have to keep the momentum going and not make it a “trend” for social media.

When it comes to business, fashion has always been dominated by white cis men. Now, we have Black people gaining more power and authority, creatively and business-wise too, rightfully so. We have compiled a list of Black-owned fashion houses you need to spend some huge coins at. Take a look at how these 8 menswear brands are changing the fashion landscape.

Priya Ahluwalia was awarded and given the title of Leader of Change at the 2021 Fashion Awards held on 30th November, for her namesake brand.

Her sustainable brand pulls inspiration from her upbringing in London coupled with her Indian-Nigerian background. She makes use of deadstock fabric to tell contemporary, powerful, and compelling stories.

Take a look at her Autumn Winter 2020 collection ‘Frequency’. Her looks are artistic and very wearable at the same time.

Virgil Abloh is one of the greatest designers of our generation, without a doubt. He has created and ushered in a completely new style into the world of men’s fashion.

Heading Louis Vuitton and Off-White, Virgil has been successful in creating a huge fan base all around. For his 2021 RTW show, Vogue noted that while talking to him backstage he said – “ If I were to look at my body of work, I think I’ve grown up the most in the shortest amount of time. I think it’s rebelling against the younger version of myself. And that’s the first time I’ve actually said that.”

Nigerian-born London-based designer Mowalola graduated from CSM, is known for working with materials leather and PVC.

Her work is an eye-opener and will make you think about how society treats black people. Her iconic pristine white suit with bullet shots and blood dripping print, a commentary on the rising number of innocent black people killed by white people, is one of the most powerful garments in fashion.

Lil Nas X donned the suit for his SNL performance adding another conversation of the unjust treatment of members of the LGBTQIA community.

She is appointed as a creative director for Kanye West’s Gap collaboration.

Pyer Moss has been an advocate since day one. Kerby Jean Raymon made his stance by having Black icons as his primary source of inspiration for his collections. And he places this inspiration right in the center of the collection so it’s undeniably recognized.

For his Haute Couture show, he decided to let the world know the designs and inventions that we use as everyday items were made by innovative Black people who were not given proper recognition. His RTW looks, like the ones below, also have a theme of empowering Black creators of incredible knowledge.

His talent has made him a star and it will not dim anytime soon.

A-Cold-Wall* was started by Samuel Ross as an extension of his research process. He was inspired by the British class system, the designer has a rich background of references to get inspired by. A-Cold-Wall looks closely at the codes of social construct and the aesthetic and language of high-end, modern, luxury menswear.

Just this last season, Samuel Ross, wanted to explore abstract ideas and modern architecture and turn them into shapes that cover the body almost like a cocoon. Even though he took a conceptual turn with the silhouettes, he described his clothes as “steeped in functionality.”

Jerry Lorenzo’s brain Child Fear Of God started as a streetwear brand. He started without knowing much about the industry and its workings and is now one of the hottest names in the industry after having a creatively innovative brand and working with Kanye West and Justin Beiber and collaborating with brands like Ermenegildo Zegna.

Now, Fear Of God has donned the garb of luxury. The house has now incorporated strong tailoring, knitwear, and accessories like shoes, backpacks, etc.

For his seventh collection, he released lookbook images, take a look at a few of our favorite looks from the collection.

CBAAF says they make “high vibrational” clothing, meaning all their clothes are ethically made, with recycled cotton and hand-dyeing techniques. And no, it’s not just buzzwords thrown together, CBAAF has proved their mettle with their amazing creations.

It has a kind of nostalgic yet contemporary and a very homely feel to it. It makes you feel like an art student in a cute rustic town in Rome.

They make wearable clothes and focus on high-quality essentials that you can flaunt.

Tremaine Emory’s collection released in September of this year was based on the unjust treatment of the British colonizers. He beautifully translated it into clothes, he showcased his take on the British flag as a huge chunk of their history is the senseless violence against generations of Black and Asian communities.

In an interview with The Face, Emory let us know that “A big part of this collection for me is inspired by Steve McQueen’s Small Axe series”

His signature is funky tees, hoodies, tracks, and jeans with vivid iconography on them, like this Black Maddona tee. His jeans also have a strong story to tell.