Here’s how Dan Levy is fashionably basking in his fame Dan Levy, the actor, writer, director, comedian, and producer of the Canadian super hit show Schitt’s Creek, has now become a familiar face to us. … 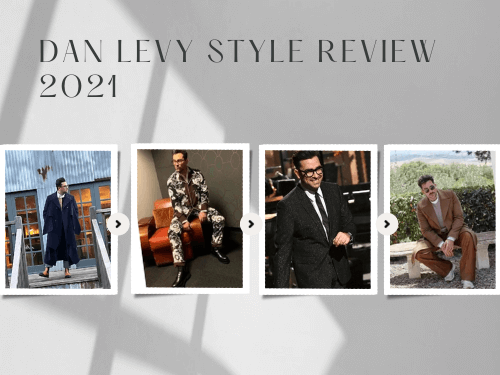 Here’s how Dan Levy is fashionably basking in his fame

Dan Levy, the actor, writer, director, comedian, and producer of the Canadian super hit show Schitt’s Creek, has now become a familiar face to us.

What started as a humble project ended up being one of the most talked-about and ultra-binge-able shows. The final season of the show, deservedly, won 9 (nominated for 15) Emmys, becoming the first-ever sitcom to do so.

The show is deeply rooted in Dan’s upbringing and personal life. As his dad Eugene Levy, who co-produced and played his father in the show, was and is a big deal in Hollywood, Dan says he came from a house of privileges and that was his social circle, and he always wondered what “absolute riches to rags” story would look like. The show has received many accolades worldwide and Dan is at the center of every event, so is his wardrobe.

Today we dive deep into Dan’s style and fashion game in 2021, on and off the red carpet.

Posted on his Instagram story on 5th November, Dan was at Soho Farmhouse, England in a full Loewe look styled by Erica Cloud. He was invited to the BMW x GQ Heros event. This is a classic Loewe outfit from head to toe. The sweater is a patchwork cashmere jumper along with wide cuffed jeans.

He must’ve been cold so threw on that navy blue layered trench coat. The flowy fabric pieces look gorgeous as the wind blows.

Style tip – wide-leg denim is in vogue, so opt for it over skinny jeans to not only look fashion-forward but also be comfortable while running errands.

He loves floral print and we love it on him. For his appearance on the Jimmy Kimmel Live show he wore the first look (the brown and white suit) by Maison Valentino. The suit looks fresh and exciting, covered in large floral print, which is not something commonly seen in mens fashion. We love that he is taking risks and is being a trailblazer. Although we are not sure about the black boots.

The second look is by Loewe for the CLash De Cartier event at Place Vendome, Paris. The event was a debut for Cartier’s jewelry in rose gold, so the floral print works well here. Here we love the cream shoes to stand out from the all black look but not to over power the yellow and red floral print.

For his SNL guest appearance and specifically monologue, he looked dapper in this black sparkly Celine suit and Cartier bling. This is just to let everyone know that a black and white suit is still acceptable as long as it’s sparkling with Swarovski crystals.

Here, Dan is wearing Dior. What is remarkable about this outfit is that he is one of the celebs to embrace the luxe-loungewear, niche luxury brands are creating to cater to a client base that prefers comfort over trends. This fit looks relaxed and flattering, it is also in a colour combination that we rarely see put together. We never knew light mauve and chocolate brown would look so good together.

Style tip – Even though it’s not a major part of the look, the white undershirt and shoes really tie the whole look together. You can use this tip if you feel your outfit looks a little off.

In his 73 questions with Vogue, Dan said his favorite designer was Dries Van Noten, so getting this Dan x Dries Van Noten moment for SAG Awards is special.

This was the actual runway look and we love how it fits into Dan’s current aesthetic, loose fit, baggy pants, and funky accessories like the gold buckle on shoes. Dan is also known for experimenting with colours and this earthy maroon color looks great on him.

We are seeing a pattern now, he is following that general rule of thumb of styling darker colors with lighter ones.

Dan gave us another chic moment at the SAG Awards, this time in a The Row oversized cream suit with a cravat and of course Cartier bling.

It was a very fulfilling year full of award shows for Dan (most of them from the home of course). For the Critics Choice Awards, he wore this military-inspired Dior suit by Kim Jones. The black and white classic combo but with a fun twist and inspiration to it. We appreciate how the thin belt-like cummerbund matches the white in the rest of the suit and the military-style high ankle boots hit the nail on its head.

With this look, he was really stepping out of his oversized style and into something different for him and we must say it really paid off.

Another major moment we had this past year was Pierpaolo Piccioli’s first Valentino menswear haute couture. Dan wore it for the Golden Globes and was shot by Lewis Mirrett for Vogue.

The yellow suit really pops against the neutral gray background, and in this signature oversized suit style he looks comfortable and confident. The attention to detail is what is interesting here, notice how the shiny sequin turtleneck matches the glitzy golden shoes.

We are cheating and bringing in a look from 2020. Dan wore this stunning red velvet jacket by Tom Ford for his People’s Sexiest Man Alive Issue. We like how the trousers are different from the jacket but the glasses and the turtleneck match. It is almost creating this cut in half visual illusion where the top half is seeking more attention.

After the insane year and success of his show, it was only obvious that he attended the MET. A huge deal nonetheless, and he chose to make a powerful statement in this head-to-toe Loewe by Jonathan Anderson look.

“Jonathan built upon an image of two men kissing from Wojnarovicz’s work, F— You F—– F—–, named after a homophobic cartoon the artist had come across. But rather than feed on the message of hate, we wanted to celebrate queer love and visibility — acknowledging how hard artists like Wojnarovicz had to fight, while also presenting the imagery in a way that offered a hopeful message,” Dan wrote on Instagram. “Tonight, we’re celebrating the resilience, the love, and the joy of the community while honoring a crucial American voice that was taken from us too soon.”