A new kind of drama has taken over social media recently, the generational war. A few Gen Z influencers on TikTok made some choice comments on the iconic fashion moments of their older siblings. This … 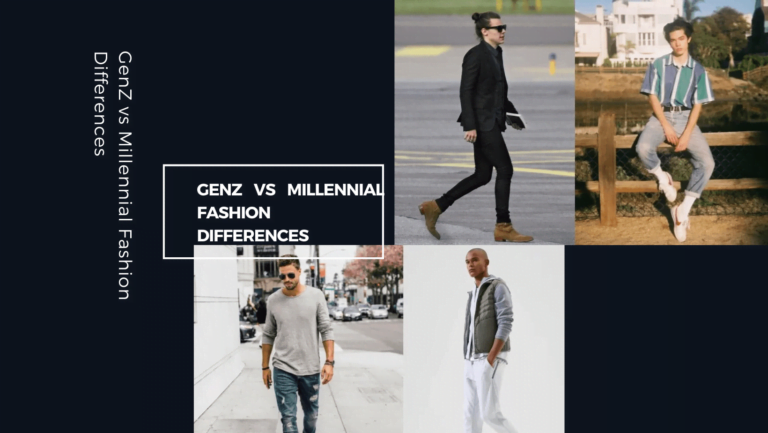 A new kind of drama has taken over social media recently, the generational war. A few Gen Z influencers on TikTok made some choice comments on the iconic fashion moments of their older siblings.

This lead to a kind of feud between the two. Now we are not here to say what is right and what is wrong, we are going to cover everything from a neutral 3rd person perspective. We believe you should wear whatever you want and it shouldn’t be up for debate.

So to make your styling choices simpler we will walk you through what’s considered Gen Z and what is considered millennial fashion.

Now, this actually kind of started the whole generational feud. Gen Z believes that skinny jeans are now out of fashion, which made a few millennials feel a little bad because this was a defining garment of their generation (or maybe because that is the only thing they owned and did not want to stop wearing)

We also feel that Gen Z fashion has also been highly influenced by the pandemic, this is when people started wearing more comfy pieces. People did not want to feel any more restricted than they already were.

Harry Styles in his classic Skinny Jeans and Connan Gray in the generation staple loose denim.

Gen Z is now wearing baggy pants, shorts, trousers, jeans. Basically everything. Also, this style has also become popular after Billie Eilish become one of the biggest Gen Z icons, so naturally, her style was emulated a lot and it trickled down to men’s fashion.

The Adidas three stripes trainers were the biggest thing in 2017, literally, everyone was wearing them, regardless of their gender. Now that is also considered something from the past.

Gen Z has moved on to chunky sneakers. That is the new big thing. Again we feel this is due to the pandemic, chunky sneakers are so much more comfy and versatile compared to those trainers. We say this because brands like Yeezy by Kanye are bringing out so much variety in chunky sneakers and looking at that other smaller brands are also now following the trend.

Looking for some good quality, expensive-looking chunky sneaker? Head over to our Shein story to get one for yourself.

Millennials were never really big on “athleisure” as an aesthetic. They never fully accepted it as something to be donned even while running errands. They usually put on what was known as casuals, which was a tee shirt and trousers or shorts and minimum accessories. And matching co-ord sets were reserved for jogging or gyming.

But Gen Z really brought a new aesthetic (and unintentionally a completely new segment in fashion) known as athleisure. It is, essentially, a mix of sportswear that can be doubled as leisurewear. It doesn’t matter if you play any games or frequent the gym, you can still sport the athleisure look and you will be considered stylish.

TikTok and Gen Z have made “athleisure” so popular that brands like Louis Vuitton have shown clothes styled in that way in multiple collections to appeal to a younger crowd and stay relevant.

Millennials were a fan of big bags. That was considered “manly”. Bags in solid bold colors with almost no design or innovation. If any notable designs were seen that would be on Gucci monogram bags. Millennials only carried bags either for traveling overseas or to the office, a “small” bag only meant a wallet. And other times most of their essentials were thrown in their female counterparts’ purses.

But Gen Z on the other hand said “No we won’t be lugging around with huge unnecessary bags.” They brought the concept of mini bags to carry essentials like id proof, money, small water bottles, sunscreen, etc.

The trend of mini bags can be traced back to Jacquemus, when they showed their mini (barely 1 or 2 inches) bags, carried around by Lizzo. This was then emulated by men’s fashion, and this really gave the designers the leeway to create new designs and bring around innovation.

You can find extremely cool bags on Shein, check out our story on 30+ Best Items to Buy From Shein.

It’s not global warming that decides our fashion now, it’s social media. Millennials loved graphic tees, a style perhaps popularized by talented Black Hip Hop rappers. I mean if you are a millennial you obviously owned at least one graphic tee if not over a dozen.

These tees usually had some cheesy/motivational quotes, iconic cartoons, or abstract graphic print. But one thing that was a stamp of millennial culture is band tees, we all had a tee-shirt of our favorite band which was either a conversation starter or a fight starter if you didn’t know at least 5 songs of the band.

Joe Jonas in a graphic tee and Lil Nas X and Jaden Smith in Graphic hoodies.

But that is too old-fashioned now. Gen Z is donning huge, baggy, oversized graphic sweaters usually styled with (yes, you guessed it) baggy denim and small bags. They have also included tote bags as a part of their generation’s identity as a response to the current environmental crisis.

These graphic sweaters/college pullovers can also be styled with a turtleneck as an effective layering style during the winter.

Nike, Louis Vuitton, Ralph Lauren, Supreme, Armani are some of the most beloved brands of millennials. Walking into a room in full designer was considered a status symbol, a sign of ultra-luxe high fashion.

But Gen Z has flipped the script and now they are all about thrifting and getting vintage clothes AND flaunting them. Consider it a trend or a fad it is honestly a boon that finally a generation is thinking about their carbon footprint and changing their actions to bring change. Peer pressure of this kind is healthy, pressure your friends in buying from sustainable