Meet Wisdom Kaye – a Tiktoker who is revolutionizing men’s fashion

TikTok has created a new world of absorbing shorter content, challenging content creators. Incredibly creative individuals like Wisdom Kaye achieved the impressive feat of garnering over 5 million followers on TikTok and over 1.5 million … 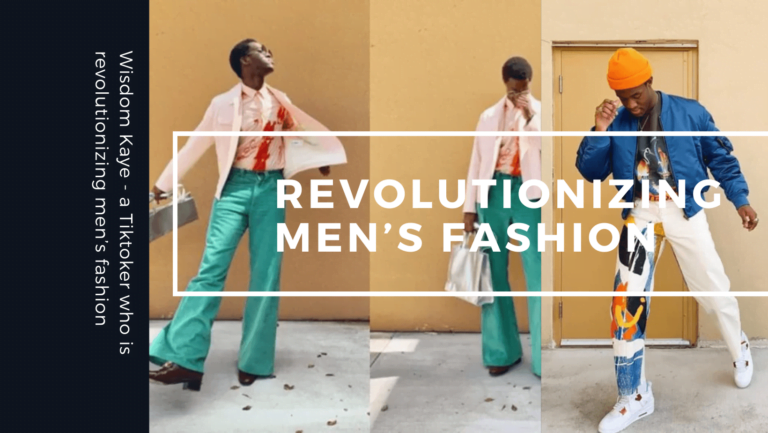 TikTok has created a new world of absorbing shorter content, challenging content creators. Incredibly creative individuals like Wisdom Kaye achieved the impressive feat of garnering over 5 million followers on TikTok and over 1.5 million on Instagram. The 20-year-old creator, who is now signed by IMG(a modeling agency) is reimagining men’s fashion. He was, rightfully, invited to major fashion shows which happened last month alongside creators like Luke Meagher and Bretman Rock, and has been featured in Teen Vogue, and even walked for Balmain for Olivier Rousteing’s 10 year anniversary at the fashion house.

The Houston, Texas-based content creator has won over the internet with his incredibly fresh take on fashion. Millions on the internet agree that he should have been invited to the Met Gala over other influencers from the same platform.

He has created a niche on Instagram for dark-themed, hyper-masculine, a warrior from the future vibe amassing over 80 million views and 10 million likes. But in this blog, we will be talking about his fashion posts on Instagram. His regular posts are of him going around the world in fun, peppy, colorful, and bright clothes.

Earlier this year Kaye posted pictures of his photoshoot, in an Ann Demeulemeester scarf and Yohji Yamamoto ensemble, captioned “The moment” (possibly a reference to Wendy William’s famous line). Kaye has a knack for putting unexpected garments together and making them seem like an obvious choice.

In an all-black outfit, he managed to play around with the texture, opacity, and sheerness of the fabrics and style it with an orange and white scarf placed in an unconventional manner.

From Beyonce to Camila Cabello, everyone is exploring the teal and red combo, so it was fun to see Kaye’s take on it. He styled the teal Marc Jacobs trousers with this peachy, pastel pink Fendi jacket and a Paul Smith pink shirt with a red abstract print on it. The colours work very well together, we would definitely recommend you try out a similar combo to make a statement.

The accessories are – Dior sunglasses, Gucci boots, and the iconic Telfar bag.

You never know who you’re going to run into in New York, so dressing up is the advice Kaye gives and he follows what he preaches. Spotted strutting the streets of NY in this monochromatic look, Kaye looks stunning in a yellow ochre woolen chunky turtle neck by Parts Of Four, Henrik Vibskov jacket, flared brown Gucci trousers and his favorite Telfar bag, and of course a face mask.

Notice, monochromatic does not necessarily mean the whole outfit needs to be in the exact same colour, you have to freedom to explore the values, tints, and shades too.

Kaye seems to really love warm, autumn colours. Here he is sporting the same Parts of Four turtlenecks, this time styled with a scarf by Acne Studios, Marni jacket, and Balmain shoes. Good for IMG because Kaye knows how to model clothes and make them the center of attention.

To mix and match colors on your own, you need to have a dominant color and an accent color (or supporting color). Here, he let blue and orange be dominant, and the yellow and black act like supporting colors by making up a small percentage of the outfit.

Making use of the same blue and orange combo, here Wisdom styled his Paul Smith shirt with Marc Jabobs blue flared trousers, the classic Gucci boots, Versace sunglasses, and a Telfar bag but this time in orange.

He doesn’t rely on lighting, heavily produced sets, and camera angles to make the outfit look good. It can’t be denied that he has a knack for styling outfits that you want to keep looking at or, even better, buy.

Again, it is the way he wraps the scarf in a way that is totally never seen before, which piques your interest. helps him create characters and transport us to his fantasy world.

Okay, so let us talk about a few of his looks that are absolutely out of this world. He uses just black, white, and gray, but it is the way in which he uses it, so creatively, that makes him so unique.

The first look is an all-black look by styling clothes by Boris Bidjan Saberi and Julius_7 along with a yellow ocher Henrik Vibskov jacket accent and black Ann Demeulemeester boots. He accessorized the whole look with a steel metal gauntlet on one arm to further push the idea of futuristic fantasy.

This outfit proves that not everything futuristic needs to be black. He paired his Rick Ownes pants and Kiss boots with an asymmetrical harness like a garment (that comes down diagonally from his shoulders and straps at his thigh) by Andagain, a sustainable luxury brand, which means that the garment may possibly have been upcycled from existing clothes hence having an asymmetrical design.

Finally, the ultimate. The metallic Heliot Emil trousers (which look super futuristic) are styled with a Connor McKnight top. The black armor-like harness, which has pockets on the side (reminds us of Prada gloves with tiny pouches) adds to the whole fantasy Kaye is trying to create with this look. He topped it off with boots by Zegna and sunglasses by Maison Margiela.

Kaye is undeniably talented and deserves much more recognition and accolades.

Which was your favorite look out of all of these? Let us know in the comments below.